Q & A with Michael Finkel

Q: How did you verify the hermit’s story? What kinds of fact-checking did you do to confirm the details in the book?

It was vitally important to me, on a personal and professional level, to tell the story of Christopher Knight as accurately as possible. Knight’s story has so many elements that verge on the utterly unbelievable — no fire for 27 winters? never a severe illness? not one conversation? a thousand burglaries? — that it was essential to try and present the tale just as it happened, free of embellishment or exaggeration.

Also, there was my prior incident with The New York Times Magazine. In 2001, while writing a story about child labor in West Africa, I combined several interviews together to create a composite character. I was caught for my deception and banned from writing for the Times. My previous book, True Story, is partly about this incident (and also about a murderer who briefly stole my identity).

To verify all of the information in The Stranger in the Woods, I hired two professional fact-checkers  Riley Blanton and Max Thorn, both of whom work for GQ Magazine, where I had previously published an article about Chris Knight.

Blanton and Thorn spent hundreds of hours affirming quotes from people I interviewed for the book, re-reading material I gathered to write the narrative, and examining every notebook I filled while interviewing Knight in jail. There are no pseudonyms used in this book and no identifying details have been changed.

Knight himself is the chief source of material for The Stranger in the Woods. Every word of his that I’ve used in the book was said to me directly, was written in a letter, or was spoken during a court hearing.

Could Knight himself have misrepresented his story? This idea is addressed — and rejected — in the book. Knight’s story is certainly unique. Many people in Maine still cannot comprehend how he was able to survive so long in such brutal conditions.

And yet not one person who spent time with Knight — including the two officers who arrested him and both his defense attorney and the district attorney — had any doubts about the veracity of his story. Every psychologist I spoke with who reviewed Knight’s tale felt that Knight was telling the truth. I also fully believe him.

There is not one shred of compelling evidence that refutes any aspect of his tale. Meanwhile, the evidence in his camp, including clotheslines that have been in place so long that trees have grown around them, and no signs of a fire pit, show that Knight, as difficult as it is to believe, really did live alone in the woods of Maine for nearly three decades.

Q: What made you feel compelled to tell Knight’s story? Do you worry about drawing more attention to a man who wants to remain anonymous?

From the moment I learned about Christopher Knight, in a newspaper article published shortly after his capture, I was riveted. I couldn’t stop thinking about Knight’s solitude, and what he had to say about it, what he experienced, how he survived, what he learned.

Every detail that emerged about Knight — like the ingeniousness of his hidden camp, or his proclivity for stealing books — only increased my curiosity. Combined with my own love of the outdoors (especially cold places), and the fact that I’d recently had three children and was now living a mostly indoor, noise-filled existence, deluged with domestic responsibilities, I was obsessed.

It turns out that I wasn’t alone. According to Knight’s attorney, approximately 500 journalists attempted to contact Knight. For reasons that remain somewhat mysterious — Knight said that he simply felt pleased by the words in my handwritten introductory letter — I am, I believe, the only one who received a reply from him.

Knight was aware, from my initial letter, that I was a journalist, and during each of our jailhouse meetings, I openly took notes. Still, of course, I was concerned about bringing attention to a man who clearly wanted as little publicity as possible. But it was always Knight who had control of our interactions — he chose to mail me letters and cards, a total of eight times, and he had the power to reject any jail visit, but accepted all nine of my visits.

I believe that Knight realized he might be endlessly hounded to tell his story, and that if he told it once, and allowed it to be made public, he might be able to have more privacy going forward.

When Knight and I had our final long visit, in his backyard, it seemed that he was somewhat looking forward to having the book written. He even called me his “Boswell,” referring to James Boswell, the Eighteenth Century Scottish writer best known for The Life of Samuel Johnson, one of the more famous biographies in all of literature. When I told Knight that my plan was to write a very short book, he seemed disappointed to hear this, and actually implied that he was hoping I’d write a long book about him.

At the very end of our time together, Knight did mention that he’d said all he wanted to say, and that it was now time to leave him alone. And I have.

Q:  Why do you think Knight’s story has resonated so deeply with so many people?

I think that nearly everyone, from time to time, has had the notion to just chuck everything and get away from it all — from the constant demands of work, from the incessant emails and texts and calls, from pressing responsibilities. We may take a vacation for a week or two, but virtually no one ever really escapes the pressures of modern life.

Knight did. And depending on your perspective, Knight’s time in the woods represents either a warning or an ideal. On one hand, he suffered so greatly, and gave up so much, that his case can be used to prove the folly of quitting society. On the other hand, he lived with more freedom and more unscheduled leisure time than virtually any of us will ever have.

Either way — and perhaps precisely because Knight’s feat cannot be easily categorized — his story is fascinating and resonant with so many people. Most of us pass our entire lives without spending a single day completely alone, without really examining our own selves. I believe that many of us, on some level, recognize this lack of true self-knowledge. We yearn for some time alone but feel trapped in the daily hustle, burdened by the constant need to earn money and seek distraction, and frequently feel overwhelmed.

Knight lived a life so far beyond the mainstream that we can look on with awe or disgust, but hardly with indifference.

Q:  How do you reconcile your admiration for Knight’s retreat from society with the fact that he stole — more than a thousand times — from his neighbors? Is he a thief?

Of course Knight is a thief, as he will be the first to tell you. And I don’t believe there has to be a reconciliation between the admirable aspects of Knight’s experience and the unsavory ones. It’s that very tug of war, between the amazement and the disappointment, between the fortitude and the criminality, that helps to make Knight such a compelling person.

Knight himself said, “I don’t want people trying to justify my bad behavior in an attempt not to sully what they admire in me. Take the whole package, good and bad. Judge me on that. Don’t cherry-pick.”

Q:  Knight craved solitude while at the same time enjoying the products of civilization, like packaged foods, books, and radio. Is he a “true” hermit?

Christopher Knight, I believe, is the truest of all hermits. A very strong case can be made that Knight is the most solitary known human being who has ever lived.

Every other hermit in recorded history, as far as I can tell (and I spent months upon months researching recluses), had some form of regular interaction with others.

The extreme Christian hermits of the early centuries A.D., known as Desert Fathers, who lived in caves along the banks of the Nile River, held communal gatherings once a week. Even the most extreme of the Buddhist monks had teachers come check on them, and people to deliver food. The anchorites of the Middle Ages all had assistants, and welcomed conversations with passers-by. Other hermits shared their poems or writings or artwork or scientific discoveries with the world.

No one I could find in my extensive research lived as deeply secluded, for nearly as long, as Knight. To pull off such an extreme feat of solitude required some law-breaking. Knight was never comfortable with the decision, but to be completely cut off from everyone else in the world — to be the truest hermit possible — he concluded that he had to steal.

Q: Where is Chris Knight now? When did you last speak to him or hear from him?

Knight, as far as I know, is still living with his mother and sister in the house where he grew up. I’m not certain of this because we never had another real conversation after the intense meeting in his backyard. I attempted to visit him the day after, and again one more time, but both times he immediately shooed me away. And he has not written me a word since his elegiac letter with the flower doodle at the bottom.

It is very clear that Knight does not wish to communicate with me any further, and I have respected his wishes.

Q: You plan on sending Knight a copy of the book to read. Are you hoping to hear from him, and how do you think he’ll react?

Yes, Knight will receive a copy of The Stranger in the Woods.

I have written the book with openness and honesty and obsession and care, and I hope — I believe — that Knight will respect my dedication and genuinely accept my efforts as reasonable and fair.

But I suspect that I will never be sure of this. I’m always hoping to hear from Knight — I’d be delighted to see one of his letters in my mailbox — but Knight’s reaction to the book, I assume, will likely remain unknown. From the man who redefined silence I expect to hear nothing but silence. 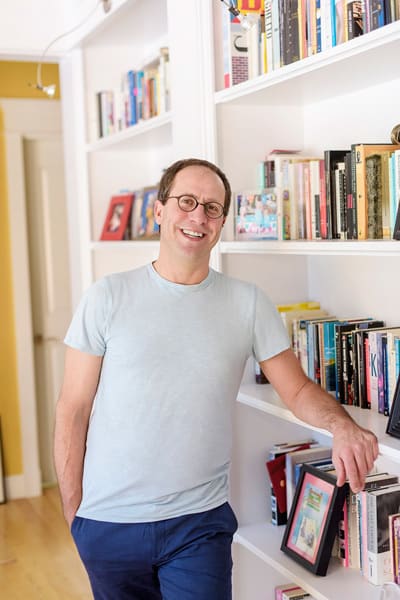