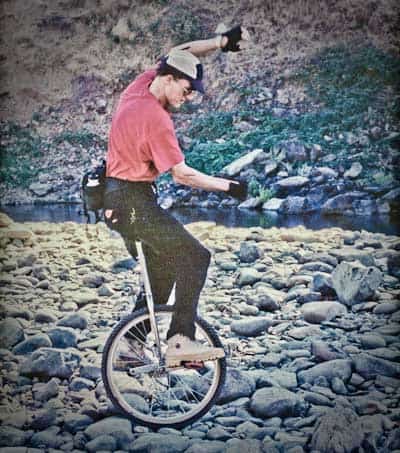 Riding a unicycle up and down mountains requires the balance of a gymnast and the temperament of a teenager.

from The Atlantic magazine

Why the red unicycle was left in the Seward, Alaska, dump and what inspired George Peck’s wife, Carol, to bring it home are both unclear. “I’m a salvager and recycler,” is all she will say. “She’s a dump rat,” Peck says. Carol put the unicycle in the garage, and Peck found it there. This was almost fourteen years ago. His life hasn’t been the same since.

“I glom on to things,” Peck says. “He gets obsessed,” Carol says. Peck taught himself to ride the red unicycle — no books, no instructors. He practiced daily for more than a month before he could wobble up and down his driveway. Then he attempted to take the unicycle onto the roads. Riding a unicycle is as precarious as it looks — the “cone of balance,” as Peck calls it, is extraordinarily precise. A pebble can be enough to put you on your back. So can a patch of sand or a gust of wind or a crack in the pavement. This may be why the red cycle was tossed into the dump: Seward is possibly the worst spot on the planet in which to ride a unicycle. The place is all sand and gusts and cracks, not to mention ice and snow and logs and boulders and mountains.

Peck learned to ride his unicycle under all conditions. He discovered how to make the cycle hop, and he honed the skill until he could pop over logs two feet in diameter. He figured out how to power through boulder fields, how to jump up and over picnic tables, how to turn in ankle-deep mud. He became skilled at riding in dried-out riverbeds, across frozen lakes, up mountain trails, and through wind-crusted snow. This is clearly not what unicycles were designed to do. When the red unicycle fell apart, Peck drove to Anchorage and bought a new one. When that broke, he ordered another. After a dozen more were destroyed, he began designing his own.